LAUREN'S FIRST AND GOAL TO HOST 7-ON-7 CAMP AT ST. ANTHONY'S 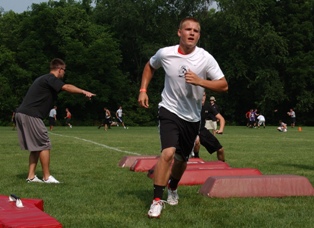 The camp is the primary fundraiser for Lauren´s First and Goal Foundation which provides financial support for brain tumor research and cancer services, offers financial and emotional support to families living with pediatric cancer, and increases awareness of the disease. Since its creation in 2004, the foundation has raised more than $1 million, including almost $250,000 this year.

“We are grateful to the strong contingent of Long Island high school football programs who have been very supportive of the Lauren's First and Goal camp in Pennsylvania over the years,” said Marianne Loose, who co-founded the foundation with her husband John in honor of their 13-year-old daughter Lauren, a pediatric brain tumor survivor.

“We are excited to be bringing a new format of 7-on-7 tournament play to New York and St. Anthony's, while expanding the mission of LFG to assist pediatric oncology patients and families at the Stony Brook University Hospital hematology/oncology clinic.”

In addition to the traditional 7-on-7 tournament, the day will also include a Special Teams competition, an Offensive/Defensive Line Clinic and a Kicking Competition. Participation for the event will be limited to 36 high school teams and each team is limited to 20 student-athletes.

The top two teams in the 7-on-7 will receive awards, with the winning team receiving a traveling trophy that will be presented to the first-place team every year.

Camp registration forms are available on our camp page.