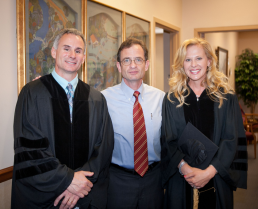 EASTON, PA. - May 19, 2012 - Four distinguished leaders received honorary degrees at the 177th Commencement at Lafayette College on Saturday, May 19.

The citations are below.

JOHN AND MARIANNE LOOSE, the nonprofit foundation you created—Lauren’s First and Goal—attests to the extraordinary difference that two humble, unassuming individuals can make when they decide to face an extreme personal challenge by embracing it as an opportunity to help others.

You have said that oftentimes it is the "smallest of people" who inspire "big change." Motivated by the hugs, heart, courage, and resilient example of your daughter, Lauren, and powered by the energy and commitment of hundreds of college coaches and other volunteers, your foundation has raised more than $1.5 million since 2004 to advance pediatric brain tumor research and cancer services and to support and assist families living with pediatric cancer.

Together, the two of you have created what you refer to as a "circle of strength and hope," the dedicated team of volunteers and other supporters within the local community and across the nation who are enabling you to do enormously important—indeed, transformative—work. You and your family are an inspiration to us all.

THEREFORE, by the authority granted by the Commonwealth of Pennsylvania to the Trustees of Lafayette College and by them delegated to me, I award you the degree of DOCTOR OF PUBLIC SERVICE, honoris causa, with all the rights, honors, and privileges thereto appertaining, in token whereof I present you with this diploma and direct that you be vested in the hood emblematic of the degree.