As part of Lauren’s First and Goal Day, the crowd learned about the foundation, a non-profit organization that provides financial support for brain tumor research and cancer services, offers financial and emotional support to families living with pediatric cancer, and increases awareness of the disease. Lauren’s First and Goal was established in 2004 by John and Marianne Loose in honor of their daughter Lauren, a pediatric cancer survivor. John is the defensive coordinator for the Lafayette football squad.

During the game, media timeouts featured interviews with 12-year-old Lauren and her aunt, Patrice Domozych, who authored the children’s book Hope is Here to Stay, which is based on Lauren and the foundation. Lauren and Patrice greeted fans at a tent where copies of the book and t-shirts could be purchased, with all proceeds benefiting the foundation.

Patti Martino, a nurse at Lafayette’s health center, shared her experiences as a long-time volunteer with the foundation. In addition, Pete Bross, a freshman member of the Lafayette football team, shared his experiences as a camper at the Lauren’s First and Goal Football Camp.

The one-day camp, which serves as the foundation’s largest fundraiser, has been hosted by Lafayette College since 2004. Last year, more than 1,725 high school student-athletes attended the camp which was staffed by more than 250 college coaches. The 2010 camp will be held on June 6 at Lafayette’s Metzgar Athletic Complex. More information on the camp and the foundation is available at www.laurensfirstandgoal.org

Photos from LFG Day can be viewed on our Facebook fan page. 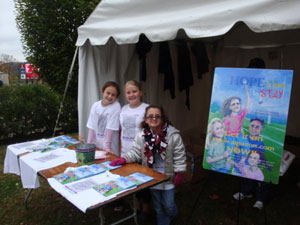