Home»Media Room»Kyle Flood Honorary Board
Error: linkLocal = 4, but newsLink is not a numeric spot. (newsLink = ) 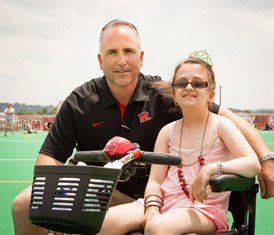 EASTON, PA (June 10, 2013) – Lauren’s First and Goal is honored to welcome Rutgers University head football coach Kyle Flood to its Honorary Board of Directors. Flood visited the foundation’s football camp at Lafayette College on June 2 and addressed the more than 2,000 high school athletes in attendance.

“We are extremely excited to have Coach Flood join our honorary board,” said LFG founder John Loose, defensive coordinator of the Lafayette College football team. “He has always been a huge supporter of the camp and foundation. He will be a tremendous help in gaining support for our mission of raising awareness and funds for pediatric brain tumor research and patient services.”

Flood is the reigning co-Big East Coach of the Year after guiding Rutgers to the conference championship in his first year as head coach. The team’s nine wins in 2012 were the most by any first-year coach in Rutgers history. Flood has been coaching the Scarlet Knights’ offensive line since 2005, and assumed the assistant head coach position in 2008.

These gentlemen will help to promote Lauren’s First and Goal’s mission of providing financial support for brain tumor research and cancer services, offering financial and emotional support to families living with pediatric cancer, and increasing awareness of the disease.

This year’s annual high school football camp in Pennsylvania set a new fundraising record, tallying more than $104,000. Since its creation in 2004, Lauren’s First and Goal has raised more than $1.5 million. A second high school camp is scheduled for Saturday, June 22 at Otterbein University in Westerville, Ohio.