Winner Earns $50,000 for Charity of Their Choice

If he wins, Liberty Mutual will award Coach Troxell $50,000 to donate to the charity of his choice - Lauren's First and Goal Foundation, and a $20,000 grant to donate to the Franklin & Marshall College alumni association for student scholarships and activities. Winners will be announced January 6, 2010, in Los Angeles, in advance of the BCS Championship Game.

Troxell serves on the board of Lauren's First and Goal Foundation and is involved in much of the foundation’s day-to-day operations. One of his primary responsibilities is coordinating the coaching staff and other details for the annual football camps, which serve as a major fundraiser for the organization. Troxell also meets with potential donors to help LFG further its mission against pediatric cancer.

“When John and I started Lauren's First and Goal Foundation to combat pediatric brain tumors, John was one of the first people who stepped up to offer his unconditional support,” said Marianne Loose. “Over the past seven years, he has devoted countless hours to LFG and his role has grown tremendously. John is an invaluable asset to our foundation and a tremendous example of the best in college football.”

In addition to Troxell’s work with LFG, his players are engaged in the Lancaster community through programs such as Teamwork, cleaning up Lancaster's James Street Improvement District, and Fulton Fridays, where his players read to students at Lancaster's Fulton Elementary.

In his fourth season at Franklin & Marshall, Troxell guided the Diplomats' 67-man roster to a 9-2 season and the ECAC South Atlantic Title. He was named the Centennial Conference's Coach of the Year by his peers and selected as the Offensive Coordinator of the South Team for the D3 Senior All-Star Classic. Three of his 67 players were selected to compete in postseason all-star games.

Between December 15 and December 29 fans can visit www.CoachoftheYear.com to vote among the finalists. Fan votes constitute 20 percent of a coach's final score.

To ensure candidates are evaluated fairly and measured against the specific values of responsibility and integrity, selection committees of College Football Hall of Fame players and coaches - including Archie Manning, Lou Holtz, Vince Dooley, Ronnie Lott, and Jerry Rice - and the national college football media will also cast votes for the winners. Hall of Fame and media votes account for 55 percent and 25 percent, respectively. 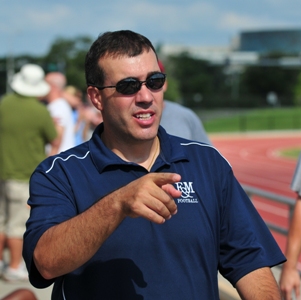