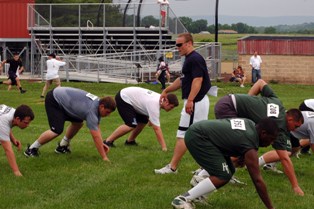 The one-day clinics are open to high school student-athletes who will be entering grades nine through 12 in Sept. 2011. During the camp, athletes are divided into small groups for offensive and defensive instruction and are coached by volunteer college coaches from schools across the country. The day also includes a presentation from a featured guest speaker, which will be announced closer to the camp date.

There is a $30 registration fee for the Lauren’s First and Goal Football Camp and student-athletes can register online at www.laurensfirstandgoal.org beginning in January.

All proceeds from the camp benefit Lauren’s First and Goal Foundation, which provides financial support for brain tumor research and cancer services, offers financial and emotional support to families living with pediatric cancer, and increases awareness of the disease. The foundation is named after 13-year-old Lauren Loose, whose father John is the defensive coordinator for the Lafayette College football team.

The 2010 camps raised almost $90,000 for the foundation with more than 2,100 students from 719 high schools in 26 states and Canada participating. Additionally, 341 coaches representing more than 129 colleges and universities staffed the two events.