Golfers Take on the Rain to Help Pediatric Cancer Patients

EASTON, PA (Sept. 29, 2009) – Nearly 60 golfers braved the rain and a tornado warning to take part in the Ninth Annual Ed Adamko Golf Outing to raise money for children with pediatric cancer. The event, held at the Club at Morgan Hill, raised $1,800, a significant increase from the $1,400 it raised in 2008.
The funds raised from the golf outing will be donated to Lauren’s First and Goal Foundation, a non-profit organization that provides financial support for brain tumor research and cancer services, offers financial and emotional support to families living with pediatric cancer, and increases awareness of the disease. Lauren’s First and Goal was established in 2004 by John and Marianne Loose in honor of their daughter Lauren, a pediatric cancer survivor.
Adamko, a neighbor of the Loose family, said, “It is a great group of guys that didn’t let the rain stop them from making a difference for these children. I’m happy to be able to support LFG for a second straight year and I’m already starting to plan for next year’s event, where we hope to raise even more money.”
Prior to the event, John Loose greeted the golfers at the clubhouse as they donned their rain gear. While the day started on a dreary note, the skies cleared by the second hole and the rain held off long enough for them to finish the 18-hole scramble.
“It’s outstanding that these men were willing to take time out of their schedules to help raise money for Lauren’s First and Goal,” Loose said. “Our ability to help pediatric cancer patients and their families would not be possible without people like this who are willing to make a difference.”
In addition to the golf outing, LFG also benefited from another recent fundraiser. Gregg Henry, whose father Charles is an LFG board member, participated in the Via Marathon in the Lehigh Valley and raised more than $1,000.
Since its inception, LFG has raised more than $800,000 through high school football camps, community fundraisers and donations. For more information about local fund-raising opportunities, visit the LFG web site at www.laurensfirstandgoal.org. 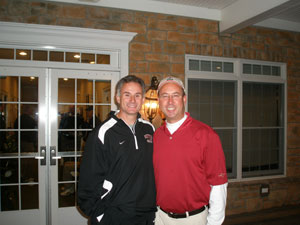