“I want to thank everyone who comes out to the camps and who helps run them,” said 12-year-old Lauren Loose, a pediatric brain tumor survivor for who the foundation is named. “It’s really important to raise this money to help other sick kids get better.”

Of every dollar raised, the foundation donates 92 cents toward research, services, family support and awareness of pediatric brain tumors and cancer. More than $500,000 has been donated since the foundation was created in 2004.

The camps raise money through a $25 registration fee for each camper as well as non-camper donations. This year, the football camps experienced a 10 percent increase with a total of 2,151 high school student-athletes attending the two camps held in June at Lafayette College in Easton, Pa. and the University of South Florida in Tampa, Fla. The camp has become the largest one day football camp in the country.

While the support of the high school teams is vital to Lauren’s First and Goal, the camps provide student-athletes the opportunity of being instructed by more than 300 volunteer coaches representing colleges and universities across the nation. In addition, a guest speaker is featured at each camp and addresses the student-athletes after lunch. University of Connecticut head coach Randy Edsall spoke at the Pennsylvania camp, while Raheem Morris, the head coach of the Tampa Bay Buccaneers, talked with the Florida campers.

“We are very fortunate to have coaches like Randy and Raheem take the time out of their busy schedules to visit our camps,” said John Loose, Lauren’s father and defensive coordinator for Lafayette’s football team. “The student-athletes really responded to the messages these gentlemen delivered about working hard and being thankful for their health.” 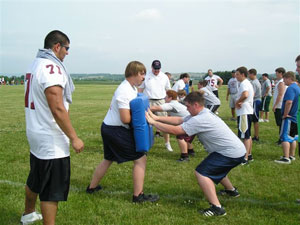