LFG'S JOHN TROXELL NOMINATED FOR COACH OF THE YEAR AWARD 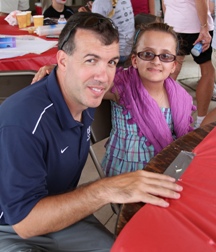 EASTON, PA (Sept. 21, 2010) – Franklin and Marshall College head football coach John Troxell has been nominated for the 2010 Division III Liberty Mutual Coach of the Year Award. Troxell was one of five finalists for the award last season.

If he wins, Liberty Mutual will award Coach Troxell $50,000 to donate to the charity of his choice - Lauren´s First and Goal Foundation, and a $20,000 grant to donate to the Franklin & Marshall College alumni association for student scholarships and activities.

Fans can vote for their favorite coaches and post a supporting story now through Dec. 4 by visiting www.CoachoftheYear.com. The top 15 vote getters in each division advance to the evaluation phase and five finalists in each division will be announced in mid-December. Another two-week voting period is open from Dec. 13-28 with the winners announced in January.

Troxell played a major role in the creation of LFG, which is a charity based in Easton, Pa. committed to providing financial support for brain tumor research and cancer services, offering financial and emotional support to families living with pediatric cancer, and increasing awareness of the disease.

He has served on the board of directors since 2004 and is involved in much of the foundation’s day-to-day operations. One of his largest responsibilities is the coordination of more than 300 college coaches who volunteer at the annual football camps. The one-day camps in Pennsylvania and Ohio are major fundraisers for the organization, which surpassed the $1 million mark earlier this year.

Troxell, who became involved with LFG while an assistant coach for Lafayette’s football team, also meets with potential donors to help LFG further its mission against pediatric cancer.

“John’s tireless work ethic, dedication and generosity have been integral to the growth and success of LFG over the past seven years,” said Marianne Loose, who started LFG with her husband John Loose. “We’re extremely lucky to have someone like him in our organization. He exhibits the qualities of sportsmanship, integrity, responsibility and excellence both on and off the football field and couldn’t be more deserving of this award.”

In addition to Troxell´s work with LFG, his players participate in numerous Lancaster community programs.

Currently in his fifth season at Franklin & Marshall, Troxell guided the Diplomats´ 67-man roster to a 9-2 season and the ECAC South Atlantic Title in 2009. He was named the Centennial Conference´s Coach of the Year by his peers and selected as the Offensive Coordinator of the South Team for the D3 Senior All-Star Classic. Three of his 67 players were selected to compete in postseason all-star games.