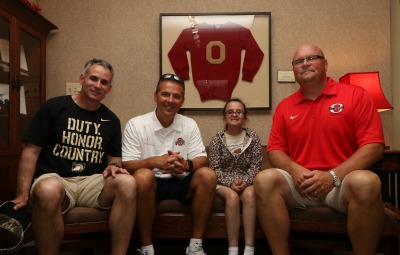 “I heard nothing but positive things about the day as a whole,” Otterbein head coach Tim Doup said. “Great instruction takes place at this event. We don’t run a 40-meter dash, a timed shuttle or any of those combine drills. We have over 100 coaches instructing you from the time you arrive until the time you leave, but with some competition thrown into the mix. We really appreciate everyone that takes time to come help.”

The camp is the primary fundraiser for Lauren's First and Goal Foundation, with all proceeds going directly to its mission of providing financial support for brain tumor research and cancer services, offering financial and emotional support to families living with pediatric cancer, and increasing awareness of the disease. Locally, donations help support pediatric oncology patients at Nationwide Children's Hospital.

“Otterbein has continued to be the perfect host for our Ohio camp,” LFG co-founder John Loose said. “The entire staff is tremendous and we were extremely excited to make it back yet again. I feel like everyone wins. I hope that high school coaches and athletes continue to get behind us so we can grow the numbers and raise even more money for research and cancer services.”

Lauren's First and Goal has brought in more than $164,000 so far this year and nearly $1.8 million to date. The 13th-annual camp was recently held at Lafayette College in Easton, Pa., surpassing 2,000 participants and raising $114,000. LFG was created in 2004 by John and Marianne Loose in honor of their now 18-year-old daughter Lauren, a pediatric brain tumor survivor.

“She has inspired a lot of people,” John Loose proudly said of his daughter. “We started this foundation when she was in kindergarten and I don’t think she quite understood, at the time, what we were trying to do. Now she’s an 18-year old high-school graduate that is the complete face of everything you see today. It becomes a lot of fun, but also very meaningful.”

During the one-day camp, players receive instruction in a variety of offensive and defensive skills from college coaches near and far. More than 100 coaches from Ohio and neighboring states volunteered at the event. Ohio State University head coach Urban Meyer served as the guest speaker for a second time in four years, this time focusing on handling adversity and turning problems into solutions.

Meyer and members of the Otterbein staff were also able to visit with oncology patients from Nationwide Children's Hospital throughout the afternoon. Overall, Doup was again pleased with the efforts and results from the many involved.

“My fellow staff members, specifically assistant coach Allan Moore, have done a great job with this camp throughout the past six years,” Doup added. “We have almost hit that point where the Loose family is able to show up and not have to worry about much. We’re proud that’s it evolved to where John and his crew can just come and enjoy a stress-free day.”

A way to help families who are battling childhood cancer© 2021 Lauren's First And Goal, All Rights Reserved.