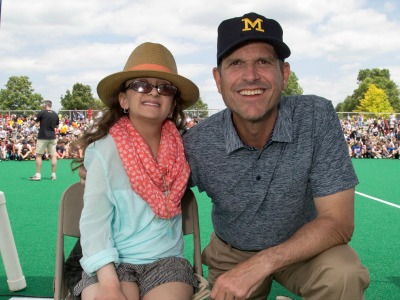 Lauren’s First and Goal Foundation announced that it has raised more than $114,000 as a result of its 12th anniversary football camp on Sunday, June 7 at Lafayette College. Camper registrations and donations from the one-day high school camp support the foundation’s mission of funding pediatric brain tumor research and patient services and assisting families living with the disease.

University of Michigan head coach Jim Harbaugh and his coaching staff attended the camp, with Harbaugh serving as this year’s featured guest speaker. He spoke to the more than 2,000 student-athletes during lunch.

“We want to thank Jim Harbaugh for bringing his entire staff and sharing a great message with the campers, families, coaches, volunteers and fans,” said John Loose, Lauren’s father and the founder of the camp. “I also want to thank our major sponsors - the Marines, Coordinated Health and Schutt Reconditioning for their generous sponsorship at the Pennsylvania camp. We also couldn’t do this without the many local businesses that provided critical in-kind donations and support, the Lafayette College football staff and community for their tremendous support over the last 12 years, and the hundreds of loyal and dedicated volunteers that come back to help year after year.”

Harbaugh now joins Monken, Flood, and his brother John, along with nine others as an honorary foundation board member.

More than 2,100 high school athletes from 18 different states and Canada traveled to the College’s Metzgar Athletics Complex to receive instruction in a variety of offensive and defensive skills from more than 360 college coaches from more than 100 schools around the country.