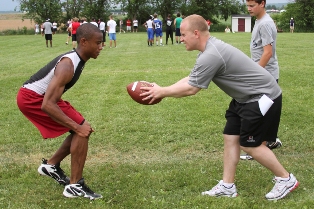 “The success of this camp would not be possible without the hundreds of volunteers and coaches and the unwavering support of Lafayette College,” said John Loose, who created Lauren’s First and Goal in honor of his 13-year-old daughter Lauren, a pediatric brain tumor survivor. “It is their dedication to this event that allows us to continue funding the search for a cure and to help families who battle this disease every day.”

The Lauren’s First and Goal Football Camp welcomed high school student-athletes from 15 different states and Canada, who received offensive and defensive instruction from more than 250 volunteer coaches representing colleges and universities across the nation. In addition, U.S. Naval Academy head football coach Ken Niumatalolo was the featured guest speaker and addressed the campers over lunch. Niumatalolo talked about the four quarters of life and the importance of showing gratitude, making good decisions and being selfless.

Along with the Pennsylvania camp, the foundation will be hosting another one-day event at Otterbein College in Westerville, Ohio on Sunday, June 27. The camps raise money through a $30 registration fee for each student-athlete as well as non-camper donations. Of every dollar received, the foundation donates 90 cents toward research, services, family support and awareness of pediatric brain tumors and cancer.