Dublin-Jerome (OH) Girls’ Lacrosse
Aunt Jean, cousins Alyse and Gabriele, along with the entire girls’ lacrosse team, spent a weekend making neck coolies to keep the coaches and players cool and comfortable at the football camps. Special thanks to Aunt Jean for donating the supplies to make them and for slaving over the sewing machine for days in preparation for the weekend assembly line. Bring on the heat!

East Islip High School National Honor Society
Led by senior Renee Domozych, students at this Long Island school raised money through a Stay-Awake-a-Thon at the school cafeteria. Members of the National Honor Society were sponsored by various organizations and individuals to stay awake from 6 p.m. to 6 a.m. The night was filled with food, games and fun, and all proceeds benefiting Lauren's First and Goal.

Easton HS Almost Anything Goes
Easton High School's Almost Anything Goes competition is an annual event held each spring. Students and staff battle each other in crazy relay events to raise funds for local charities. AAG has generously donated proceeds from this great event to LFG. This year, not only were the proceeds allocated to the foundation, but a matching donation from the class of 2007 was also included! Thank you to the senior captains for nominating LFG as the charity of choice and for all those who participated with such enthusiasm. Lauren loved the Balloon pop!!

Ed Adamko’s 8th Annual Golf Outing
Ed, one of our wonderful neighbors, organizes a golf outing for friends and neighbors each fall, with proceeds benefiting a local organization. This year, Lauren's First and Goal was the beneficiary. Proceeds from the raffle after golf tripled from last year, and this fantastic group of 72 friends and neighbors, led by Ed, raised $1400 for Lauren's First and Goal!!

Hoops for Hope
Members of the Lafayette women's basketball team hosted a charity shoot-a-thon called Hoops for Hope on Sept. 28 at Kirby Sports Center. The Leopards organized the event in honor of two of the team's off-court heroes--Kasey Keenan and Lauren Loose, daughter of Lafayette defensive coordinator John Loose.
The Leopards have pledged to make 100 foul shots as a team. All proceeds from the event were directed to two pediatric cancer foundations--Kasey's Krusaders and Lauren's First and Goal.
"I think it's outstanding that these young ladies are willing and wanting to help raise awareness about such devastating diseases," head coach Tammy Smith said. "The strength of these two young girls and their families is unmatchable and anything we can do to help the battles they face on a daily basis is a worthwhile and valuable life experience for our team."

Jason Hilber’s Ziploc Bag
Christine and Jason Hilber of Odessa, Fla. and their army of neighborhood volunteers were instrumental in preparing for and executing the first-ever LFG camp in Florida. Their 5-year-old son, Justin, was so intent on helping that he emptied the entire contents of his piggy bank into a Ziploc bag and presented it to John at the camp on June 7.

Lafayette Player Volunteers
Since the camp's inception, members of the Lafayette College football team have volunteered to help set up the day before camp and assist during camp. Some stay here in Easton for the summer, and some drive in from their hometowns to be here to help for the weekend.

Northampton High School
Led by business teacher Beth Donnelly, students participated in a paper goods drive to furnish the foundation with cups, plates, napkins and other products for use at the football camp in Pennsylvania. Not only did they supply the camp with all the paper goods for the 2008 camp, but many included notes and cards wishing Lauren well.

Run for a Cure
Tracy Elementary teachers entered teams in the Lehigh Valley Half Marathon. They run in honor of Lauren and Lauren's First and Goal! Teachers who have participated include: Ms. Barker, Mr. Case, Mr. Durie, Miss Getz, Mr. Rice, Mr. Spalding, Mrs. Stofanak, Nurse Dee, Ms. Kocher, Miss Donato, Mr. Cinoa, Cadet Kocher and Mrs. Mulrine. With the generous support of the Tracy Elementary community, this terrific team has raised almost $13,000 in support of Lauren's First and Goal. Lauren, our family and the Foundation are so grateful for your support, enthusiasm and dedication. It was so exciting and inspiring to see you all enter the stadium for the last 1/4 mile. Great job!

Teddy and Joel’s Bake Sale
Children have the most amazing ability to move people into action - especially adults and hungry tailgaters! Teddy and Joel did just that when they organized and executed the most successful bake sale I have ever witnessed at the Lafayette-Lehigh football game in November 2008. Their army of bakers and sellers, including the roving troops who ventured into the sometimes unfriendly side of the field, raised more than $1,300 for Lauren's First and Goal. In addition to the bake sale, the boys donated their hard-earned "boat fund" money - their savings from birthdays, allowance, odd jobs and chores - to the foundation.

Tracy Staff Club
Staff at Lauren and Gracie’s school, Tracy Elementary in Easton, participates in a Dress Down Day each Friday in which staff members donate $1. They recently chose Lauren's First and Goal Foundation as the recipient of a generous donation from the dress down campaign. Thank you!!! 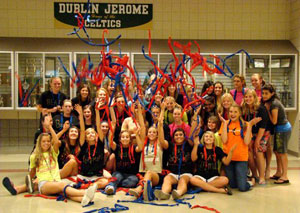 Run for a Cure 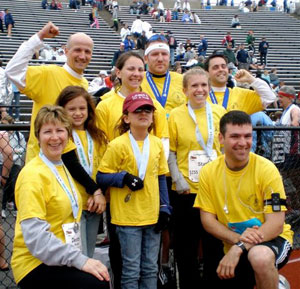 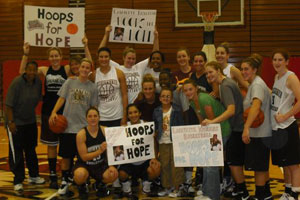 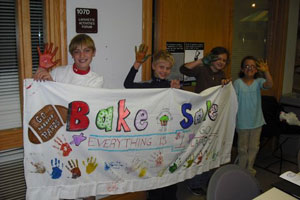